The Liftoff brand aims to provide the most advanced and detailed drone simulation systems on the market. Our authentic flight behavior and physics form the foundation of all Liftoff products and are the result of dozens of simulated systems working together.

Liftoff drone simulations use state-of-the-art models based on real-life test results and CFD simulations. Drones in our simulators are highly customizable, with components featuring true-to-life specifications that are realistically factored into the flight behavior.

While our virtual pilots sometimes ask about gravity sliders, there's more to physics than gravity only... and we can confidently say gravity needs no sliding. On this page we go in more detail about the various aspects of the Liftoff simulation technology.

There are four forces that predominantly affect drone flight:

In an inertial reference frame, weight is a downward force that is proportional to the drone's mass and the gravitational acceleration. The drone's mass is well known based on the parts selected. Gravitational acceleration is well attested and can safely be considered constant. There are slight variations depending on location, but they do not have a noticeable effect on flight behavior and even so drones generally do not have enough range for these differences to become relevant.

Thrust is generated by the rotating propellers of a drone. Propeller blades are shaped like airfoils. While slicing through air, they raise static pressure underneath them, thereby pushing the drone in the opposite direction.

For our Physics 3.0 update, we developed a new thrust model based on a curated database containing tens of thousands of data points from rigorous lab tests. Our model uses part specifications to determine the maximum RPM of a loaded motor, the static thrust at a given RPM, and finally dynamic thrust.

This dynamic thrust is then further adjusted by ground effects. Hovering close above a surface alters airflow, resulting in a higher pressure difference between the top and bottom side of the propellers, increasing available thrust. This effect depends, among others, on the type of surface, the distance to the surface and the pitch of the propellers.

This approach insures a high degree of accuracy regardless of what parts a drone might be using.

Our Physics 4.0 update focused mainly on drag calculations. Drag, sometimes also called air resistance, is a force that counteracts the movement of the drone. The strength of drag depends on many factors, the foremost being the surface area of the drone, as projected onto its velocity.

One way to visualize the drone's surface area is to imagine a camera looking back towards the drone from a little further along its current trajectory. The silhouette of the drone as seen from this perspective is the projected area. While that silhouette is easy to picture when flying straight forward, it's much harder to imagine when the drone is performing freestyle tricks or rounding tight corners during races.

As a first approach to calculate the drone's projected area, we tried implementing a camera that continuously filmed the drone. This gave perfectly accurate data, but had a significant performance overhead. Instead, we settled on an approach where 42 different angles were pre-computed before flying, which the simulation can then interpolate between at runtime. In this way, we consistently obtain an accuracy of over 98%, with no performance impact. 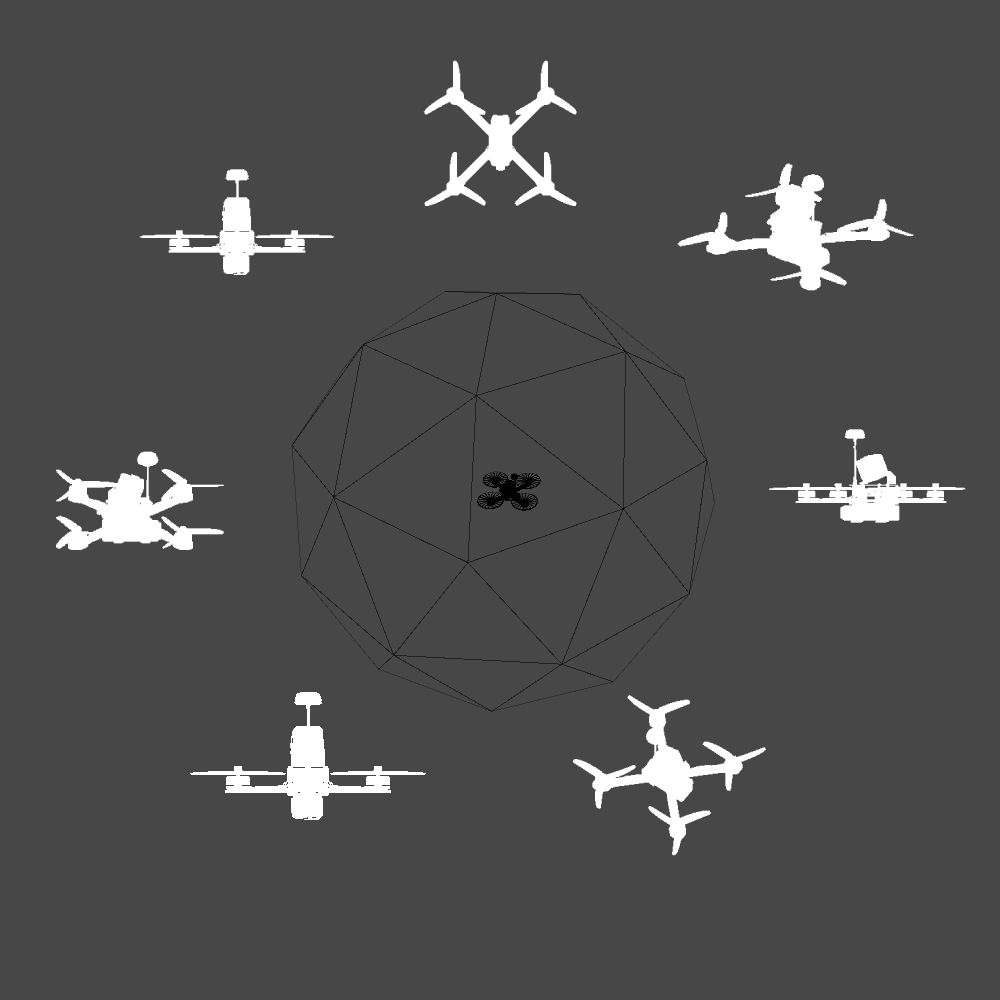 Projected area sampling process: each point on the icosphere is a sampled angle

Lift is a mechanical force generated by a solid object moving through a fluid. An exhaustive physical model of lift is quite complex and still subject to discussion today. In general terms, however, lift is influenced by the fluid's properties (density, viscosity and compressibility), the surface area of the solid object, its shape and velocity, and its angle relative to the fluid flow. Lift is perpendicular to the flow and thereby also to drag.

Lift is caused by a pressure difference and a change in flow velocity. Imagine an airfoil (the typical "wing" shape) flying forward and tilted slightly backward. On the bottom side of that airfoil, the air velocity will be lower and pressure higher, while the opposite holds for the top side. This creates a vertical upward force on the airfoil.

Although most drones are not specifically airfoil-shaped, they still generate lift in a similar manner. Consider a drone flying in straight line while pitched forward. Given the drone's orientation, this time the high pressure zone is above and the low pressure is below. In this case, lift actually points downwards! 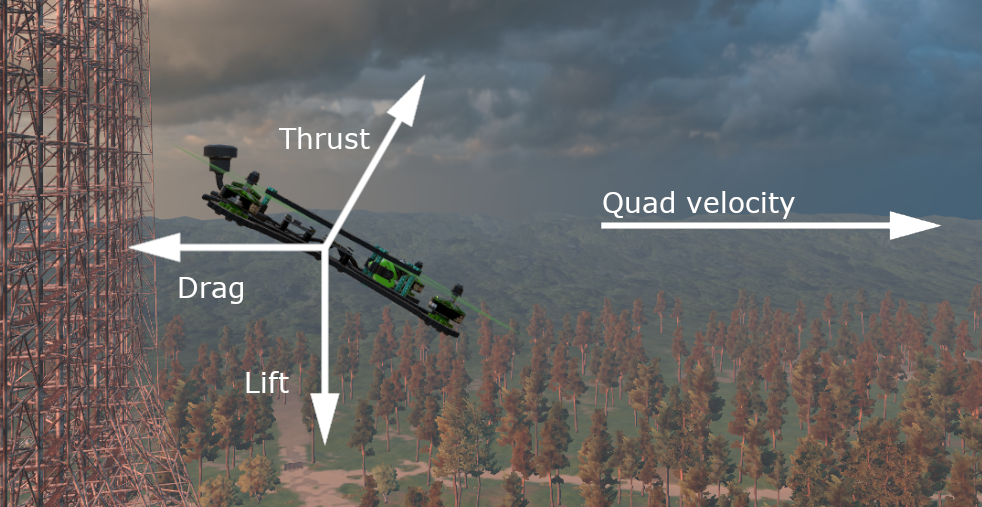 Thrust, drag and lift direction in the case of a drone flying in straight line (force scale is not representative)

Liftoff simulators use a collection of realistic flight controllers backed by virtual recreations of the sensors one would find on modern drones: gyroscope, accelerometer, GPS, barometer, altitude sensor....

The flight controller receives the pilot's input through a radio receiver. Based on its sensor data, it then transmits a certain voltage (indirectly through ESCs) to the motors in order for them to reach a target rotation speed, resulting in a certain amount of thrust from the attached propellers. Most flight controllers use PID controllers to micro-manage motor rotation speed and correct for any disturbances. This micro-managing happens at a very high frequency and allows the drone to constantly adjust its flying, smoothly and with great precision.

Rather than simply replicating the superficial effects of flight controllers, our simulation code simulates their entire functioning. Our most sophisticated flight controller makes the same calculations as a real-life one, thought at a loop frequency of 500Hz. Given that PID tuning is a fundamental aspect of real-life drone tuning, the one-to-one match between simulation and reality holds great training potential.

Battery life is a important factor in drone applications and often presents a bottleneck for specific missions. An accurate and realistic simulation of the battery discharge is therefore critical.

​Simulating battery discharge is surprisingly complicated. Various battery types have different characteristics and discharge profiles, which depend highly on the motor rotation speed, which in turn depends on the flight controller and the pilot's input. Liftoff simulators use a combination of specification sheets from battery manufacturers and custom discharge profiles based on real-life tests.

Depending on the power of the signal, its frequency, and the environment, radio signals can degrade or even be lost entirely. Consequently, the radio signal is often the limiting factor in a drone's maximal operating range.

Liftoff simulators simulate degradation of the video signal. Depending on the drone's position relative to the pilot and the shape or material of any obstacles in between, the video feed will become more distorted and noisy.

RC signal degradation can also be simulated, but is generally only enabled for industry-oriented products, as this level of realism can be frustrating in a more game-oriented setting.

Want to stay up to date?